La Crosse, WI (Sept 1, 2017) – As the La Crosse Promise neighborhood revitalization program approaches its second year anniversary, the non-profit has promised up to $600,000 to 12 households in La Crosse for educational scholarships. Eleven of those homes have been new construction in the Washburn and Powell-Poage-Hamilton neighborhoods of the city, adding to a total assessed value of more than $2.2 million to these core neighborhoods.

The La Crosse Promise neighborhood program launched in September 2015, with 30 scholarships of $50,000 available to those who build or significantly renovate a home in the targeted neighborhoods. By October of this year, there could be up to 17 scholarships awarded, said Executive Director Brian Liesinger. The homes that have been built so far range in assessed value from $167,000–200,000, with homes still under construction expecting to be assessed above $200,000. All of the designs were approved by the city, ensuring the homes fit with the historic character of the neighborhoods.

“We have gained significant momentum for this program since the first Promise family moved into their home in October 2016,” Liesinger said. “It reflects an important shift in perception for Washburn and Powell-Poage-Hamilton from declining to desirable.”

The most recent activity for the Promise homes include the purchase of a spec home on Johnson Street and the demolition of an aging home on 7th Street on July 26. The latter was a property purchased from the City of La Crosse by homeowners who also received La Crosse County’s Acquisition and Demolition grant. Both of the new homes will replace structures that were condemned.

For families interested in building or buying a spec home in a Promise neighborhood, there are three properties currently available. One developer has been approved to reserve Promise scholarships at 931 and 943 Farnam (below). The city owns a lot at 921 Farnam/922 Hood that is available for sale and is Promise eligible. These properties are listed at lacrossepromise.org.

“Our goal was to encourage construction of new homes aesthetically appropriate to the neighborhood valued at or above the $150,000,” said Liesinger. “We are on track for that goal and we are pleased to start distributing those scholarships to families in the very near future when the first candidates enroll in college.”

La Crosse Promise formed as an education and economic revitalization non-profit in 2010, with strong leadership from the City of La Crosse, La Crosse County, the School District of La Crosse and several community leaders. The scholarship program has been made possible through significant donations from three anonymous donors totaling $1.5 million.

The La Crosse Promise placed-based scholarship program is the only one in the country that offers scholarships to residents who build, buy or renovate homes in select neighborhoods. Adult learners also qualify for the scholarship if they are the legal owners of the home. All scholarships can be used at any accredited college or university in the United States. 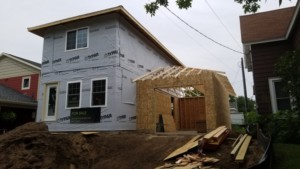 Those interested in the program can find out more at lacrossepromise.org.