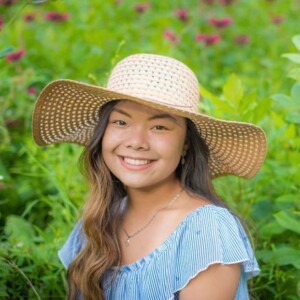 “She helped me get ready for scholarship interviews that were really stressing me out,” MyLe said. “She read through my essays, forced me to work on them, and to find and fix my mistakes. I wouldn’t have gotten as many scholarships as I did without Hayley.”

MyLe Luong moved with her family to La Crosse from Vietnam when she was six years old. She entered school with many challenges, the greatest of which was the language barrier. She looks back now as a recent Central High School graduate and cannot believe how dramatically her family’s fortunes have changed.

“I didn’t know any English, so when they placed me in elementary school, I didn’t know what anyone was saying,” she said. “They didn’t have a translator at the time. They had Hmong translators but not Vietnamese translators. My sister and I didn’t understand anything—we just picked it up as we went.

Despite the hardship, her parents believed the opportunities in the United States were worth it. In Vietnam, they lived in an agricultural village with few social and public services. Basic primary education was not provided and expensive for her family. “My parents wanted a better life for us. Dad worked long hours in a factory and mom took care of us kids,” she said.

She often feared that she lagged behind during her early education due to the language barrier, so when she arrived at Central for high school, she was nervous. “I went in with low expectations for myself,” she said. “I wasn’t feeling so great about my school performance. I was always kind of average. But Mrs. Koelbl, who was the AVID 9 teacher, encouraged me to take honors classes, and since then, I’ve done more than I could possibly think about doing. I really appreciate the teachers here. I couldn’t have done it without them. High school turned out better than I could have asked for.”

At Central, MyLe kept herself busy with as many activities as she could make time for. She participated in nine clubs and sports, including tennis, soccer, orchestra, National Honor Society, Health Science Academy, and the AVID program. In addition, she volunteered for Gundersen Health Systems, Mayo Clinic, and the Salvation Army.

MyLe connected with the Future Center after advisor Hayley Moe gave a presentation to the AVID class. Hayley had also assisted her sister before her. They worked together on the college application process, scholarships, and  the FAFSA. She applied and got accepted to the inaugural physician’s assistant program at University of Minnesota–Rochester that partners with the Mayo Clinic School of Health Sciences (MCSHS). It is an accelerated five-year program that allows her to stack a two-year physician’s assistant master’s degree on top of an initial three-year bachelor’s of health sciences degree.

“Hayley has helped me tremendously,” said MyLe. “Without her help, I don’t think I could have gotten into the PA program. She really worked with me on interviewing skills and how to carry myself. I was so overwhelmed.

MyLe is most looking forward to diving deeper into the health sciences and meeting new people with similar interests. At the same time, she’s anxious about adjusting to the workload and the total cost. With the estimated tuition cost of $95,000 per year for the two-year master’s program alone, she has worked with Hayley to understand the financial aid available to her and to go out and get scholarships.

“She helped me get ready for scholarship interviews that were really stressing me out,” MyLe said. “She read through my essays, forced me to work on them, and to find and fix my mistakes. I wouldn’t have gotten as many scholarships as I did without Hayley.”

As she prepares for her college journey and career ahead, she also looks back with the hopes that other students—namely, her younger sister—pay a visit to the Future Center. “There are so many opportunities that students don’t know about that Future Centers can connect you to,” she said. “Hayley will guide you in a great direction.”