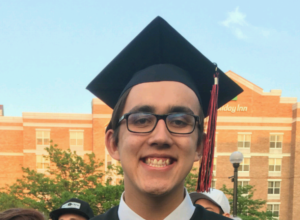 University of Minnesota-Twin Cities, majoring in political science and journalism

“If I didn’t have the Future Center I wouldn’t have had the means or the place to get the college application and the enrollment stuff done as efficiently as I did.”

You would most likely find Seth in the Future Center every day during his senior year. He talked about his college plans but also he liked the atmosphere where he can discuss issues, bounce ideas off his classmates, and have a good laugh.  That’s pretty much a big attraction for a future journalism student.

“Ms. Moe is very friendly and open. Even she though has a ton of work to do, she’ll stop for a second just to listen to you about stuff, not just preparing for college. While I worked hard on our plan, I still felt that I could lighten up when I was in the Future Center and also talk seriously about the everyday issues I have faced in life.”

Seth was pretty set on his career plans and Ms. Moe was there to help him work hard towards making the dream a reality.  Seth said that the Future Center provided a place to work on homework, eat lunch, or just to relax and alleviate the stress that comes with the last months of high school.

“If I didn’t have the Future Center I wouldn’t have had the means or the place to get the college application and the enrollment stuff done as efficiently as I did. Without that support, it would have made high school a lot rougher for me.  I went through a pretty hard time around the second quarter and I wasn’t in a really great place mentally. Ms. Moe definitely helped me work out the things that were preventing me from keeping on task for my college plans.  I have seen her helping other students with personal problems.  I think that’s fantastic.”

While he feels he is a good writer, he said Ms. Moe helped him strengthen his writing abilities and his communication skills to the point where he feels confident in his professional demeanor and also his accountability.  Getting the FAFSA done and going through the enrollment process was daunting but something he knew he needed to get done and Ms. Moe encouraged him to complete the necessary steps because it was an important part of the financial puzzle.

While he has worked hard at several jobs during his high school career and has a pretty smart savings plan in place, he knows college is a serious expense.

“I knew how much college was going to cost so throughout high school I have been putting a third of all of my paychecks into a savings account. It’s gotten pretty sizable by now. Saving money is important – like even though I want to go out to lunch today it might be a good idea not to. If you make that decision enough times it builds up and you’ll have money for school.”

Seth is pretty realistic about what he wants to do and what challenges he may have in college.  “Everyone always says you don’t have to know what you want to do after high school but I feel that there is definitely unspoken rule that you probably should know and it’s a big pressure for me. I have changed my mind so much. Being able to get some good answers at the Future Center has helped me work that out.”

He is excited about attending school in the Twin Cities and said he knew from the start after he toured the school that he wanted to go there and he felt like it was a good fit academically.

“College is important to me — not just to make money, though I do think that’s important — but it will be a big benchmark in my life, a way to get to my career goals. Also, for the experience itself. My whole life I have heard that you’ll have a great time in college and I guess I want to find that out for myself. I look forward to the academics also for the social life, like meeting new people and doing new things.

“I am really excited to finally experience the things I’ve heard about all my life. I appreciate how Ms. Moe respected that and believed in me.”