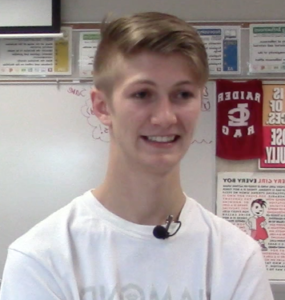 University of Minnesota-Rochester, major in Health care with plans to be a pharmacist

“I feel if we didn’t have the Future Center a lot of students wouldn’t be as prepared for college.”

“I was so confused and my friend told me Ms. Moe helps everyone. I was a little apprehensive about talking to an adult who I didn’t know, but I met Ms. Moe and she was amazing.”

Parker is passionate about the healthcare field, for many reasons. When he had been a patient at Mayo Clinic Health System, he was impressed the treatment he received. “In my career, I really want to treat others like the way I was treated.” But there is something deeper that has inspired Parker to pursue a college education and ultimately a career where he can help others in need.

“When I was nine, my dad died of a heart attack unexpectedly. I was right there with him and I felt so helpless because I couldn’t help him. I never want to feel like that again.”

He would use his personal experiences when creating his scholarship and admission essays and he struggled with this. To start, he brought in a one-page rough draft to review with Ms. Moe. By the time they were finished weeks later, the piece had morphed to over two pages because Ms. Moe challenged him to add and edit content to create something that was meaningful and expressed who he was as an individual. He said he was shaking when he started writing the story that he felt so close to his heart.

“There was one time when I was a little kid, I remember feeling very afraid. I was outside and it was getting dark.  I heard a coyote howl and I wanted to get inside. My dad said that there was nothing to be afraid of. We lived on top of a bluff and we walked together through the dark and he told me that everything out there was more afraid of me than I should be of them. That experience changed my view on life. I look at situations differently and I just tackle them one at a time. That’s what I expressed in my essay.”

Parker admits he was nervous writing such a personal account with Ms. Moe, but after they connected he said it was nice “seeing her smiling face every day.”

While he has chosen healthcare as a field choice, he wasn’t sure what career path he would take and subsequently his major. He spent a lot of time in between classes talking with Ms. Moe about specific careers. “She guided me as I bounced back and forth between healthcare positions and she set up a job shadow with a pharmacist.”

Parker came to the Future Center nearly every day his senior year to finalize enrollment to the University of Minnesota-Rochester. “Ms. Moe encouraged me and she kept me on task. She knew what I needed to get done and that helped a lot. I am proud of myself for what I got done.”

He was pretty excited to be the first one to fill out his FAFSA and see that FAFSA sign hanging up in the Center window. He feels finances are a big concern for students facing the high cost of college so he was pretty happy to get a $2000 scholarship.

When asked if he feels confident as he gets closer to setting foot on campus, he said he knows college will be a challenge and he learned that during the essay writing process with Ms. Moe. “It was hard work but we pushed through and got it done.  I think that’s what I have to do when I get to college. After I won the scholarship, I felt so great and I wanted to feel that success every day.”

Talking to Ms. Moe has made Parker realize that he can view adults as “just people.”  He claims he is very shy so it was hard for him to approach her.  “Now I am better at connecting with adults maybe because I am becoming an adult myself!  So I encourage my friends to come to the Center. I feel if we didn’t have the Future Center a lot of students wouldn’t be as prepared for college.”

While Parker loved coming to the Future Center to create a plan for himself, he feels that Ms. Moe is way more than just a resource for college planning.

“She has helped me through way more than just school issues and helped relieve a lot of stress on me personally. She is a great communicator and I appreciate that. She was there for me.”