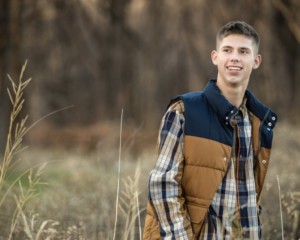 “I didn’t even know how to apply on my own.  It just got a lot easier with my advisor’s help.”

During his senior year at Logan High School, Cody was unsure about which college to choose and how to get in. It was a daunting process applying and eventually enrolling in college once he was accepted. “I know college isn’t supposed to be easy but I was struggling before I even got in.”

Cody knew about the Future Center because of his brother, who got so close to Mr. Lam when he was a student at Logan that he even invited him to his graduation party. “I already felt like I had that connection with Mr. Lam when I got into high school and that’s pretty awesome.”

When Cody first visited the Future Center, Mr. Lam talked with him about his options he and looked at colleges that might fit Cody’s needs.

“I didn’t even know how to apply on my own.  It just got a lot easier with my advisor’s help. We narrowed things down and it turned out that Viterbo was one that seemed to fit all my needs. I had already met with the basketball coaches there as well.”

As Cody and his advisor worked together and built a relationship, Cody found that it was definitely easier to prepare for college and his future with a guide like Mr. Lam.

“Every day we touched on topics like how to get into college and what they are looking for in a student to help you get in. We talked about the FAFSA, and scholarships. He even helped my mom too with some of the things on the FAFSA. Also, I think my acceptance to Viterbo had a lot to do with the help I received at the Future Center.”

When the crunch time of senior year started stressing Cody out, he turned to Mr. Lam. “He is really a relaxed and an outgoing guy. I liked how fair he was and he wouldn’t push me in a certain way, like, you should go to this college or that one.  He let me do what I wanted, but he guided me the right way. He was always checking in with me –he would say ‘did you get this done?’ or ‘do you have the application ready?’”

As deadlines loomed, Mr. Lam and Cody would sit down a few times a week and review Cody’s scholarship essays and together they fixed mistakes and perfected the content.

And it paid off, literally.  Cody received a whopping six scholarships – including one from the Boys and Girls Club, Ranger Renaissance, the Booster Club and the Logan Scholarship.  “I don’t think I would have applied for the Logan Scholarship and some of the other ones and got as much money as I did without Mr. Lam’s help.”

Not only was Cody pretty excited about getting the awards, he said his parents were just ecstatic.  “Mr. Lam was very excited for me, too.  It makes me feel pretty good that I got that much money because of his help. Paying for college is stressful for me and other kids too.”

While Cody is very glad to continue his basketball career, he is pretty serious about his major. “I was inspired to go into social work because I want to give back to those kids who I have seen struggle. I have a lot of friends who have been through tough times and I have seen how it’s affected them in the long run. I wished they had had some guidance and I think I can be that person to help people get through the bad stuff.”

Cody says his experience at Logan has been great, but he is ready for his big leap to college and a new life experience. He is looking forward to the dorm life (because he likes “hotel living”) and he feels confident that he has the knowledge and tools he needs — thanks to his parents, teachers, coaches and Mr. Lam — to balance his life at school and on the court.  He is realistic, though, about how hard he will have to push himself.

“I know I have to stay self-motivated through everything. It’s a lot of personal responsibility — like just waking up, going to class, doing homework, studying when you’re supposed to… that’s going to be a challenge. ‘ Since he had a great grade point average in high school, he is hoping he can keep that up in college. He also feels that socially, being on the basketball team will give him a jumpstart with a group of friends. He is ready to forge on ahead.

“I think Mr. Lam really helped to shape my path.  I have a really good start.”