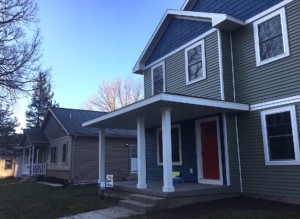 One family’s determination to relocate to La Crosse has paid off with the completion of a new home and the promise of education dollars for their two children.

Dawn and Jerry Wacek began a 17-month building project in July 2016, which ended when they moved into their new La Crosse Promise home in December. The Waceks endured the process of property acquisition, demolition, and construction for their new home in the Powell-Poage-Hamilton neighborhood.

The Waceks, who moved from Rice Lake, Wisconsin, first inquired about the Promise program in July 2016. Soon after they began taking steps to secure their new home—by securing incentives offered by the City of La Crosse, the County of La Crosse and La Crosse Promise.

One year later, in July 2017, the demolition crew cleared the lot for their new home at 1206 7th St., and construction began on a 3 bedroom/2.5-bathroom Craftsman-style home. The Wacek’s oldest son is a 5th grader at Hamilton Elementary and their youngest will be in K4 this fall. Each are eligible for up to $25,000 in education scholarships upon graduation from a district high school.

“We were so excited to build our new home in the Powell-Poage-Neighborhood and to be a part of the Promise Program,” said Dawn Wacek. “We love the neighborhood, the nearby park, and the school.”

The Waceks are one of the first Promise homebuyers to utilize incentives from the city and the county. They purchased the lot from the city and applied for an acquisition and demolition grant from the county.  With that funding, they took on the daunting project of removing the existing structure on the property, which was beyond repair. They hired Tom Thompson with TN Enterprises to build the home and did much of the finish work themselves. The estimated value of the home is approximately $215,000.

In addition, the Wacek home is located next door to another La Crosse Promise home. By the end of 2018 there will be at least five new Promise homes on 6th and 7th Streets, between Hood and Adams.

The La Crosse Promise neighborhood program will award scholarships to 30 homeowners who buy or build new homes or renovate existing homes in the Powell-Poage-Hamilton and the Washburn neighborhoods. The scholarship fund has been made possible by the contribution of community donors. To date, there are 10 new Promise homes occupied by scholarship recipients, with six additional homes under construction, and one renovation project, resulting in a total of 17 scholarships reserved.

The La Crosse Promise placed-based scholarship program is the only one in the country that offers scholarship dollars tied specifically to neighborhood revitalization projects. All scholarships for adult and dependent learners can be used at any accredited college or university. Additional requirements apply and can be found at lacrossepromise.org.