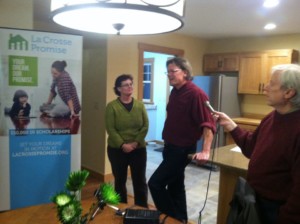 Celine Donofrio and her husband Phil Johnson speak with the press at their new La Crosse Promise Scholarship home on 9th Street in La Crosse.

La Crosse, WI (December 5, 2016) – A second La Crosse Promise Scholarship home is complete and another family has a brand new house to call home — in addition to a big chunk of funding for college.

La Crosse, WI (December 5, 2016) – A second La Crosse Promise Scholarship home is complete and another family has a brand new house to call home — in addition to a big chunk of funding for college.

The Johnson-Donofrio family moved into their new home in November.  Not only did this freshly-built structure replace dilapidated homes on 9th Street across from Lincoln Middle School, their home is next door to a new home built by Western Tech for the City of La Crosse’s Replacement Housing Program. The “rebirth” of this city block reflects the strong revitalization efforts by La Crosse Promise and multiple partners in the last several years.

“We could have built a new home anywhere in the city or even in the county, but we chose this neighborhood,” said Phil Johnson, a teacher in the Tomah School District. “We believe wholeheartedly in the Promise and the efforts to revitalize this area.  We also place a tremendous value on education and are thrilled our sons will have a head start on financing their college education.”

Phil and his wife, Celine Donofrio, a city librarian, have two sons, Jacob, 15 and Lucas,13. Upon graduation from high school, each child is eligible to receive $25,000 from La Crosse Promise in college scholarships.

“Just one year ago, this block looked entirely different,” said La Crosse Promise Board President Margaret Dihlmann-Malzer. “Where there once were three run-down properties there are now two beautiful new family homes. The City, the County, the Promise and some very dedicated community leaders are fully committed to revitalizing these wonderful historic neighborhoods – and we’re just getting started. Not only that, there are two more children who have a jump start on their future through the Promise Scholarship program.”

“There were a total of three homes at 513, 515 and 521 9th Street,” said City Planning Associate Dawn Reinhart. “The City split 515 and gave a portion of the lot to 521 9th Street and the remaining portion to 513 9thStreet. The City also owns 507-511 and these properties will be demolished in the Spring of 2017. The lot will be listed as a Promise eligible lot.”

Builder Tom Thomson of TN Builders built the 9th Street home, as well as the La Crosse Promise scholarship-eligible home currently for sale at 717 S. 7th Street. Spies Construction built the first Promise home on 6th Street and are building a second home at 504 Johnson Street. In addition, there are four La Crosse Promise scholarship applications being processed as of December 1.

La Crosse County and City governments, local builders and top employers are all key partners in this revitalization effort, Dihlmann-Malzer said. The City of La Crosse committed to making about 30 lots available for the program in the coming years. In 2016, lots were available for as little as $3200.

In addition, in an effort to encourage increased private development in these areas, the County launched an Acquisition and Demolition Grant Program (grants up to $50,000) providing funding to developers interested in purchasing and demolishing low value properties for the purpose of constructing quality, market rate, single-family homes.  The Johnson-Donofrio family applied for and received a county grant for their building project.

Dihlmann-Malzer points out that both of the 9th street properties are located just around the corner from another community revitalization project — the Washburn Garden which belongs to Mayo Clinic Health Systems – Franciscan Health Care and the Washburn Neighborhood Association.

“We hope people will really start noticing these incredible changes to this block and the rest of our targeted neighborhoods,” she said. “These improvements affect everyone – not just those who live, work, and go to school in the neighborhood. It really affects all of us in the city and in the county.”

Launched in September 2015 after seven years of planning and fund development, La Crosse Promise is the first of its kind in the nation. The program was planned by lenders, builders, developers, past and present school superintendents, city and county representatives, business people and everyday citizens of La Crosse.  The program is mainly funded by anonymous donor families who came forward with 1.5 million dollars in contributions.