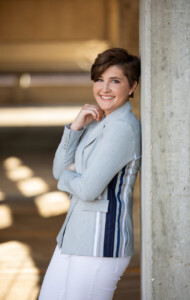 Eden has always imagined herself making an impact and leaving her mark on the world, and she feels like she has been thinking about and preparing for her future for a long time. “My whole family jokes about this all of the time. It never would have crossed our minds two years ago to be in this position. The Air Force Academy wasn’t on my radar until February of junior year, so to be where I am now is so different.”

As a student who is future driven and likes to stay busy, the pandemic lockdown forced Eden to take a step back, and she saw it as an opportunity to check items off her “to-do” list. After realizing the severity of the situation and the uncertainty of how long things would be shut down, Eden needed to switch gears, so her spring and summer months transitioned into figuring out the college application process, where she wants to attend, and how she is going to get herself there. With the pandemic, Eden was glad she had some time to sit down, be honest with herself, and to reflect on where she sees herself in the future.

“My mindset changed when I started applying for the military academy in regards to making decisions and then factoring in financial costs, location, and what is best for where I see myself going in the future. Some of the discussions with Hayley in the Future Center about who I am as a person helped me narrow down and look for scholarships and where I am going to find those opportunities and helped me ultimately choose the air force academy.”

She has officially accepted her appointment with the United States Air Force Academy, Class of 2025, Eden nervously looks forward to basic training, making lasting friendships, and challenging herself with her academics. Eden chose the Academy because she felt it put her in the best position of where she sees herself in the future, which ultimately is becoming an astronaut and traveling to Mars.

Eden encourages other students to “use the Future Center to ask questions and to hear about schools in the area or connect with. Don’t be afraid to start that conversation even though it might be scary and awkward in the beginning. I received so much help with scholarships and essays. Even just having one person look over those applications can really help. It has been good to bounce ideas off someone who has a lot of experience.”