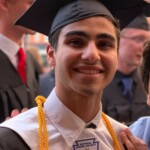 Ahmad credits his family for his driven work ethic. He shared that his paternal grandfather didn’t have a formal education but had “street smarts” and was an entrepreneurial and charismatic kind of person. He “moved from Palestine to Jordan and started a printing company with a single printing press. From there he expanded to other industries. He and his friends started a chocolate shop. From word of mouth, it rapidly grew and now is the biggest chocolate shop in Jordan. His grandfather had been running the printing house and the chocolate factory, and he wanted Ahmad’s dad towork for the family business. Ahmad’s dad declined and said, ‘No, I want to go to America, and I want to be an engineer.’” He set his sights on the United States because he knew there were great schools here and was intrigued by American culture.

Ahmad was born in the United States but holds citizenship in Jordan as well. He grew up traveling to Jordan and Palestine about every other year and is fluent in Arabic. Due to his experiences traveling back and forth, Ahmad has an in-depth perspective about systems and resources available around the world. As Ahmad got older, he tried to think about how he could make an impact on struggling countries and decided to study international business and politics. He hopes he can positively influence Jordan and Palestine’s economies.

Ahmad applied to several colleges and universities but Georgetown University and the University of Minnesota-Twin Cities were at the top of his list. In order to be accepted at Georgetown, Ahmad participated in alumni interviews and wrote an essay about solving a world conflict. For his topic, he wrote about the conflict between Israel and Palestine and offered solutions to help boost their economies. Ahmad was initially interested in Georgetown because the King of Jordan is an alumnus and the Princess of Jordan is a student. After reading more about the history of Georgetown, discovering they created a school focused on international politics after WWII, he became even more interested.

The Future Center was something Ahmad was aware of because Hayley Moe, Future Center Advisor, assisted his older brother, Omar, when he was a senior at Central High School. Once Ahmad became a senior, he knew Hayley could be a great resource to him. They worked on his college applications, FAFSA, CSS profile, and scholarships. Ahmad stated, “I wasn’t sure how everything worked in the process, and all of my essays went through Hayley to make them as strong as they could be.” Hayley and Ahmad worked on his essay for the Mark and Ann Hansen scholarship up until the last minute and that hard work paid off when Ahmad was chosen as the recipient of that scholarship. Being awarded the Mark and Ann Hansen Scholarship for $25,000 a year made his Georgetown dream a financial reality. Overall, Ahmad was thankful for having college and career resources available within the Future Center. He noted that “the environment here is stress-free. You come here to chat and get insight on your future. There’s nowhere else in the school where you can really do that. You can either have serious conversations about your future or you can just have a relaxing chat to help relieve your stress. It’s just a cozy room in general.”